As its name implies, Bel-Air Soho is located in one of Makati’s most known residential areas.

Bel-Air refers to both a gated community and a barangay in Makati City. It is bordered by EDSA on the southeast side, Jupiter on the southwest, Neptune on the north, Estrella on the northeast and Nicanor Garcia Street on the northwest. All in all, Bel-Air covers over 787,000 square meters. Barangay Bel-Air also includes Salcedo Village, Ayala Triangle, Gil Puyat Extension and Ayala North. It is one of the country’s cleanest and greenest barangays. It also offers its residents other extension services such as ambulance service and continuing education programs for household personnel.

The city of Makati itself is a top choice for anyone who wants to settle in the city. It is a center of commerce and culture, and represents the urban luxuries that Filipinos work hard for.

Makati is the country’s richest local government unit owing to having over 62,000 enterprises registered in the city. It has the highest number of business process outsourcing offices in the metro. It also has the most number of PEZA-accredited information technology parks and buildings. The center of all this business action is popularly known as the Makati Central Business District which is mainly composed of Ayala Center, Salcedo and Legazpi Villages and some parts of Bel-Air. The old Makati Stock Exchange and the Ayala Tower One is where the Philippine Stock Exchange’s biggest trading floor is. The city also has its very own powerhouse of business leaders and chief executive officers also known as the Makati Business Club, which counts among its members over 800 industry leaders which represent 450 of the country’s biggest corporations.

A well-known sub-district within the Makati CBD is Ayala Trinagle which houses major banks and businesses, multinational companies and upscale restaurants. The Ayala Triangle Gardens is a popular park frequented by residents and young professionals who want to enjoy a patch of green amid the urban jungle. Here, people can jog, enjoy a picnic and just basically hang out. Some of the country’s tallest skyscrapers are also in Makati including the PBCom Tower, Gramercy Residences and G.T. International Tower.

When it comes to education, the city is home to some of the country’s top academic institutions for all levels. Makati’s flagship university is University of Makati which is a public and non-profit academic institution. Also located in Makati are the Asian Institute of Management, Lyceum of the Philippines University-Makati, Mapua Institute of Technology, Far Eastern University of the Philippines-Makati, Don Bosco Technical Institute, Assumption College San Lorenzo, Colegio de San Agustin, Colegio de Sta. Rosa, Asia Pacific College, AMA Colleges Makati, iAcademy, Australian Catholic University-Manila and Our Lady of Guadalupe Minor Seminary.

Makati is a culture and leisure center which is why people flock to this city, not just for business, but also for fun. It is home to major commercial and retail centers, hundreds of restaurants and bars, and cultural spots.
Ayala Center is the most popular commercial complex. It is a vast expanse of walkable areas—malls, food chains, local and international boutiques, parking spaces and department stores. Outside of Ayala Center, popular retail spots in Makati include Rockwell Center—a residential and commercial complex including the upscale Power Plant Mall. On weekends, residents can opt to go to Salcedo Saturday Market or Legazpi Sunday Market which are open-air markets that sell gourmet food, antiques and other trinkets. Century Mall is also located within Century City.

When it comes to culture, Makati also has much to offer. The city is home to the Ayala Museum which houses local and international works of art. Other museums in Makati are the Yuchengco Museum and Museo ng Makati. For more upscale residents, the Manila Golf Club and the Manila Polo Club is a favorite hangout for some of the country’s richest and most powerful. The Makati Sports Club is also a go-to for sports-loving residents. When it comes to churches, residents can opt to go to Our Lady of Guadalupe, Sto. Niño de la Paz, Our Lady of Grace, Santuario de Antonio and National Shrine of the Sacred Heart, to name a few. There is also a Jewish synagogue called Beth Yaacov.

Bel-Air Soho residents will also find that the city is accessible whether as a commuter or as a private car owner. The major roads that lead to and from Makati are EDSA, South Luzon Expressway (SLEX) and Skyway. Other roads that pass through Makati are Gil Puyat Avenue, Makati Avenue and of course, Ayala Avenue.

There are buses that ply EDSA from Baclaran to Quezon City and Caloocan. Jeepneys also ferry passengers within to and from Makati and its surrounding areas. MRT-3 has four stations in Makati—Guadalupe, Buendia, Ayala and Magallanes while the Philippine National Railways has three—EDSA, Pasay Road and Buendia. The Pasig River Ferry Service also has a station in Guadalupe. For jetsetters and frequent travelers, Makati is 20 to 30 minutes away from the Ninoy Aquino International Airport. 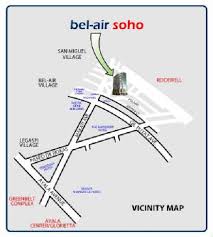